How I Reversed Dementia in My Senior Dog

SAMe has shown promise in the treatment of canine cognitive disorders, depression, osteoarthritis and can help to support healthy brain function and reduce inflammation. SAMe is also prescribed for hepatitis and liver disease. This is another supplement I opted not to add to Murphy’s cocktail since he’s receiving the benefits of SAMe from his other supplements. The idea was to provide the nutrients he needed to fight dementia without overwhelming his system with too much of any one nutrient.

Walking Doggies earns a commission from purchases made through the affiliate link above.

SAMe is often used as a complementary therapy to treat symptoms of dog dementia.

SAMe is a compound made naturally in the body that plays an important role in normal bodily functioning. It works to detoxify the liver and may help to reverse some of the symptoms of dog dementia, including mental confusion and joint pain.

Dementia in older dogs can often lead to depression.

SAMe is considered to be a natural alternative to anti-depressants because SAMe is used in the production of neurotransmitters like serotonin, dopamine, and norepinephrine (the feel good neurotransmitters).

This Important Amino Acid May Improve the Symptoms of Dog Dementia

Green Lipped Mussels: A Powerful Anti-Inflammatory That Can Support a Healthy Immune System

Murphy developed symptoms of dementia at 15 years old. He’s now 17 and has been symptom-free for 18 months. 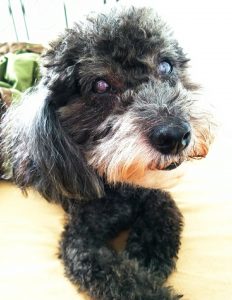 Click on Murphy’s picture for a full list of the holistic supplements that helped to reverse his symptoms of dementia, and read about his journey and recovery.